I’ve been a fan of the Far Cry series since I was first introduced to it with 2012’s excellent Far Cry 3.

I soon discovered that the franchise’s signature first-person open-world mayhem scratches an itch for me unlike pretty much any other game. However, Far Cry has felt like it’s been giving somewhat diminishing returns ever since that third game game. Outside of experimental offshoots like Blood Dragon and Primal, the core Far Cry formula — and its accompanying issues — largely went unchanged with 4 and 5.

With that in mind, I’ll admit I wasn’t optimistic that Ubisoft Toronto’s Far Cry 6 would be any different. I expected it to be enjoyable, for sure, but ostensibly just more of the same. Thankfully, though, after 30-odd hours with Far Cry 6, I’m pleased to say that the game is a pretty sizeable leap over its predecessors in several key ways, and easily the best Far Cry in years.

Characters you actually care about

Nowhere are these improvements more evident than in Far Cry 6‘s story.

Much has been said about Ubisoft’s tendency to avoid engaging with the political themes of the stories in its games. Nowhere was this more apparent than in Far Cry 5, which was heavily marketed as having a Trump-era story about religious fanaticism and the far-right movement in America but ultimately failed to meaningfully explore any of it. This resulted in a messy narrative that didn’t quite know what it wanted to be.

Far Cry 6, by contrast, has a much surer grasp on its identity. Taking place on the Cuba-inspired fictional island of Yara, the game follows the struggle between groups of guerrilla fighters and the ruthless dictator Antón Castillo (Breaking Bad‘s Giancarlo Esposito). On paper, this is admittedly a fairly standard premise for a game; hell, Far Cry 4 was also about a civil war between rebels and a tyrant, only in the Himalayas. But surprisingly, I found myself quickly invested in the Yaran conflict because of one key factor: protagonist Dani Rojas. 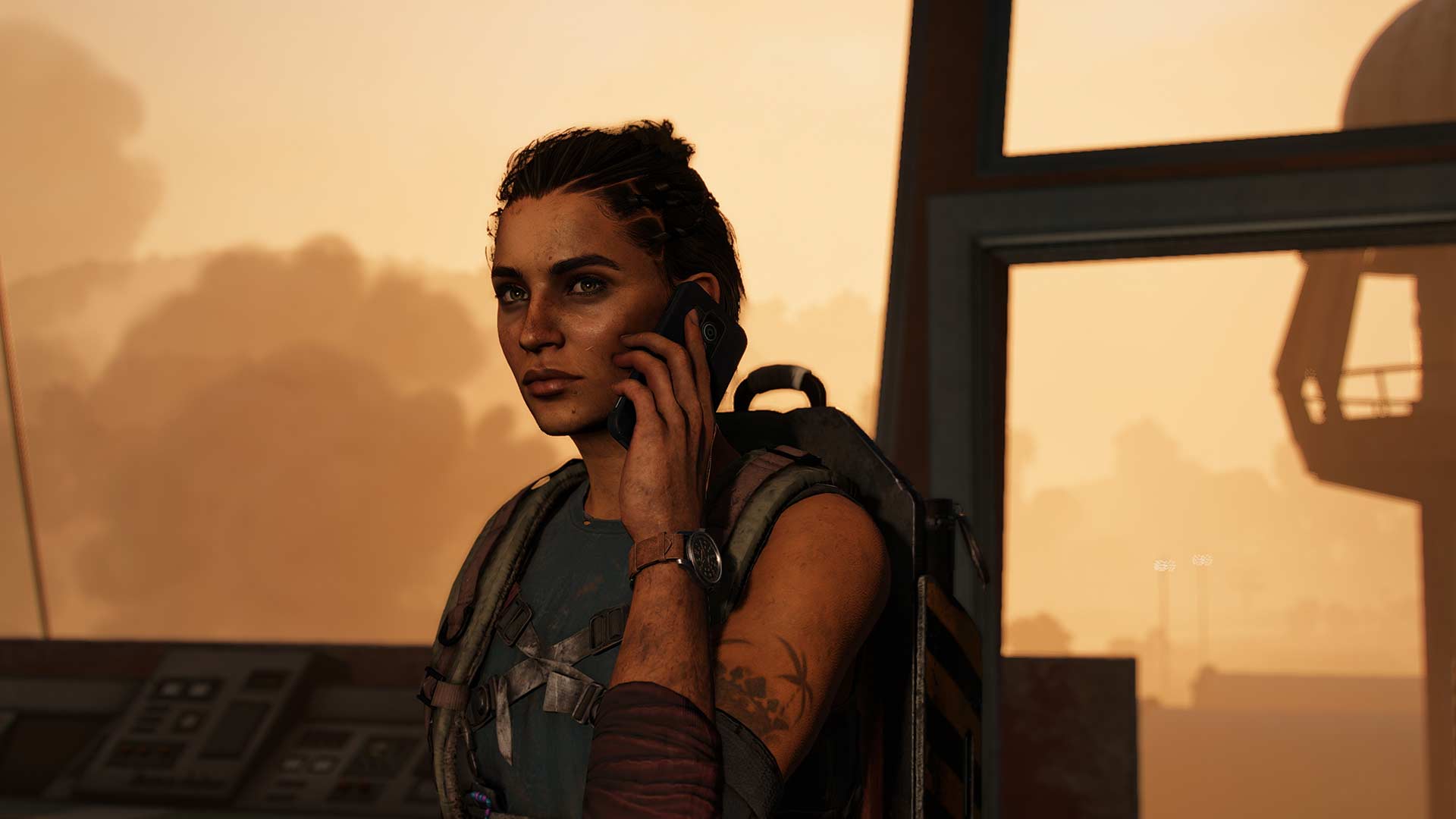 Indeed, Ubisoft Toronto’s smartest narrative choice with Far Cry 6 was to make Dani an actual three-dimensional character who appears in third-person during cutscenes and certain townships. For the most part, previous Far Cry protagonists have either been obnoxious and abrasive (Far Cry 3‘s Jason Brody), flat and forgettable (Far Cry 4‘s Ajay Ghale) or completely silent player avatars (Far Cry 5‘s unnamed deputy). But outside of letting you choose their gender, Dani has a clear, well-defined background and character arc. (Note: for the purposes of this review, I’ll henceforth refer to Dani as “she.”)

“It really can’t be understated how much having a fully-fleshed-out protagonist helps invest you in the narrative.”

Sure, Dani is the classic “reluctant hero who slowly gets drawn into a larger conflict” archetype, but it’s nonetheless done rather effectively in Far Cry 6. She’s also just plain likable, oozing personality as she sassily stands up to authority in one moment, playfully exchanges witty banter over beers with friends in the next. As a nice touch, she’ll even sing along to certain Spanish songs on the radio as you drive around, which, along with actress Nisa Gunduz’s excellent performance, only endeared me to her even more. It really can’t be understated how much having a fully-fleshed-out protagonist helps invest you in the narrative.

The supporting cast is also exceptionally strong. While I must confess that I’ve forgotten many of the characters from the previous games, Far Cry 6 has a surprisingly nuanced and memorable cast through which it explores the human costs of the civil war. 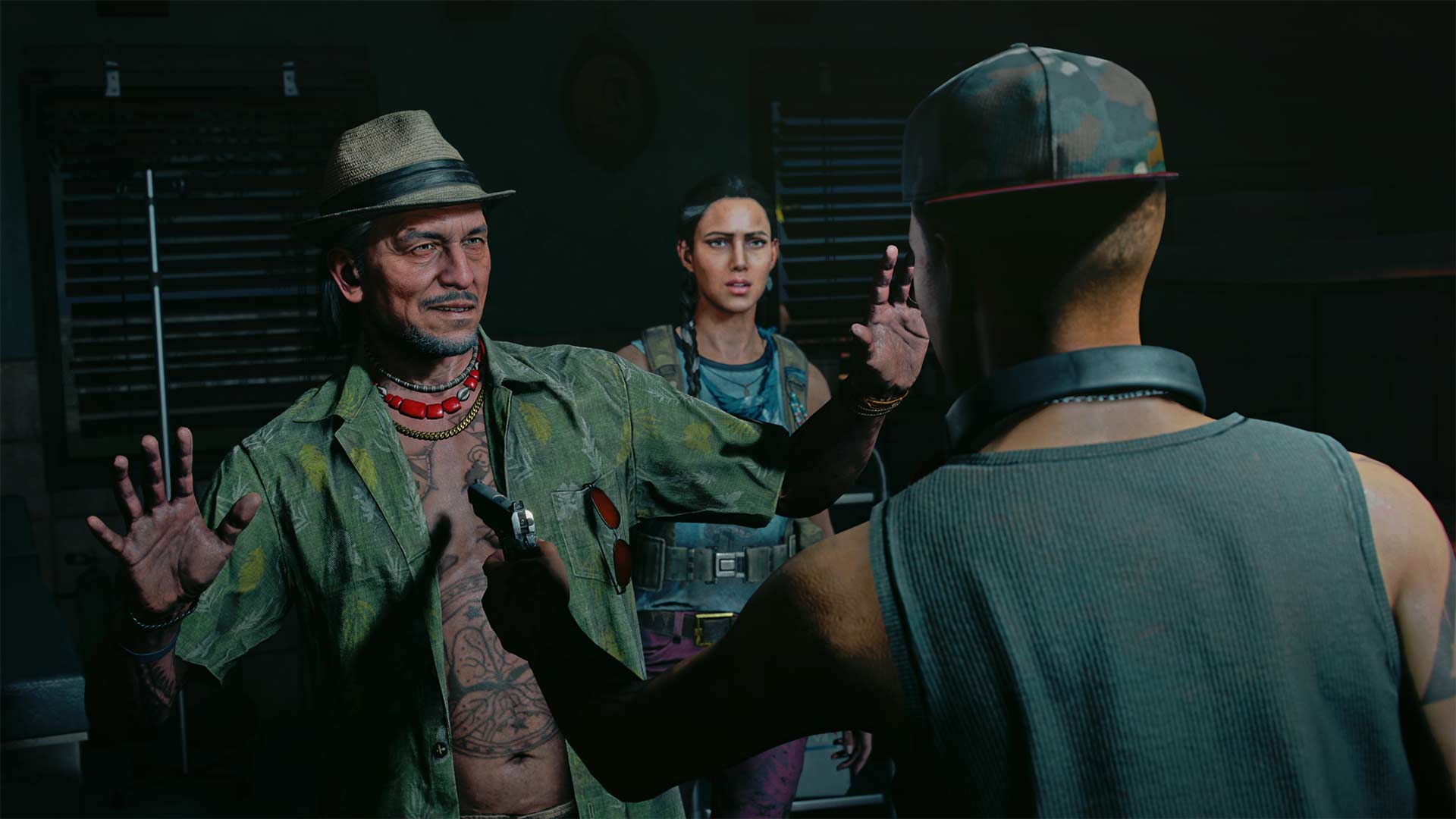 Whether it’s the rebel family that found itself split on supporting Castillo, the band of world-weary former revolutionaries who view the latest war as futile, or even the courageous trans man who fights on despite being rebuked by Yara’s cultural norms, Far Cry 6 has plenty of compelling characters. Meanwhile, the game doesn’t shy away from the more harrowing aspects of the conflict; they’re constantly being put through the wringer and, in some cases, even perish, lending much-needed emotional weight to the proceedings.

But Ubisoft Toronto actually gives Esposito much more screentime than previous Far Cry baddies, thus allowing him to leave a longer-lasting impression. He also has a unique dynamic that further sets him apart from the other Far Cry villains and even Fring: his relationship with his son Diego (Coco‘s Anthony Gonzalez). Seeing Diego struggle with his conscience and his father’s harsh teachings about war and lineage adds a compelling wrinkle to the larger threat that left me interested to see more.

A world worth exploring 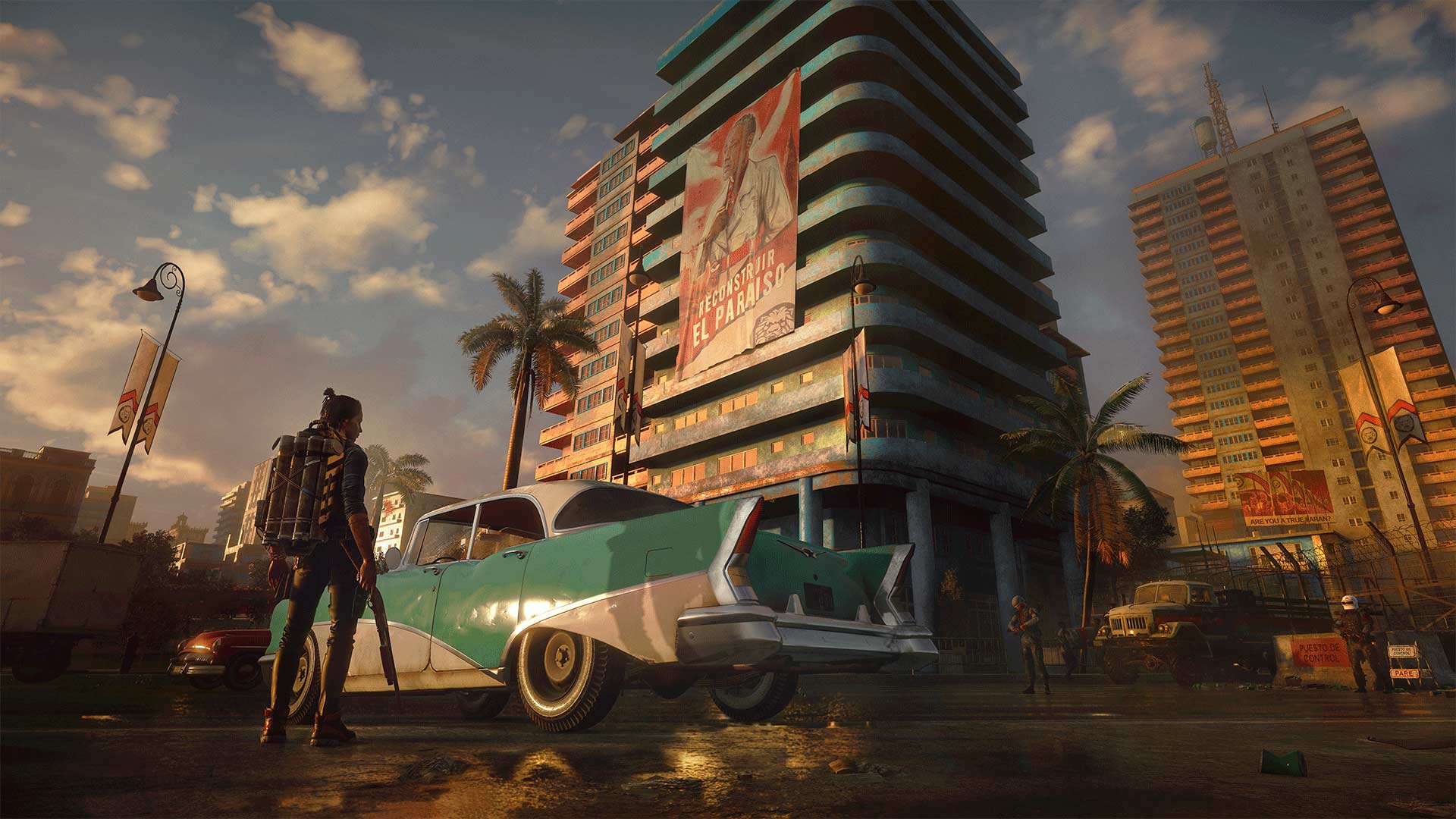 Far Cry 6‘s story is just icing on the cake to the series’ ever-satisfying gameplay loop.

As with previous Far Cry games, you spend a good deal of your time trekking across a gorgeous open-world setting and fighting off human and animal threats using guns and other weaponry. But that world is far more enjoyable to explore than the ones found in previous games. To start, Yara is refreshingly diverse from a geographical perspective. From towering mountains and thick forests to small peninsulas and a capital city police state, the country is stunning to take in, especially in 4K/60fps on PS5.

“Ubisoft Toronto has graciously removed one of the most frustrating elements of Far Cry 5‘s open-world.”

But the actual act of traversal also feels more impactful this time around. In particular, Yara has a lot of realistic bumpy terrain and other off-road stretches that are unsuited for vehicles. This is where horses (which are new to the series) come in, which are far more nimble and easy to handle. Galloping across the sun-soaked countryside in first-person made for a surprisingly engrossing experience. 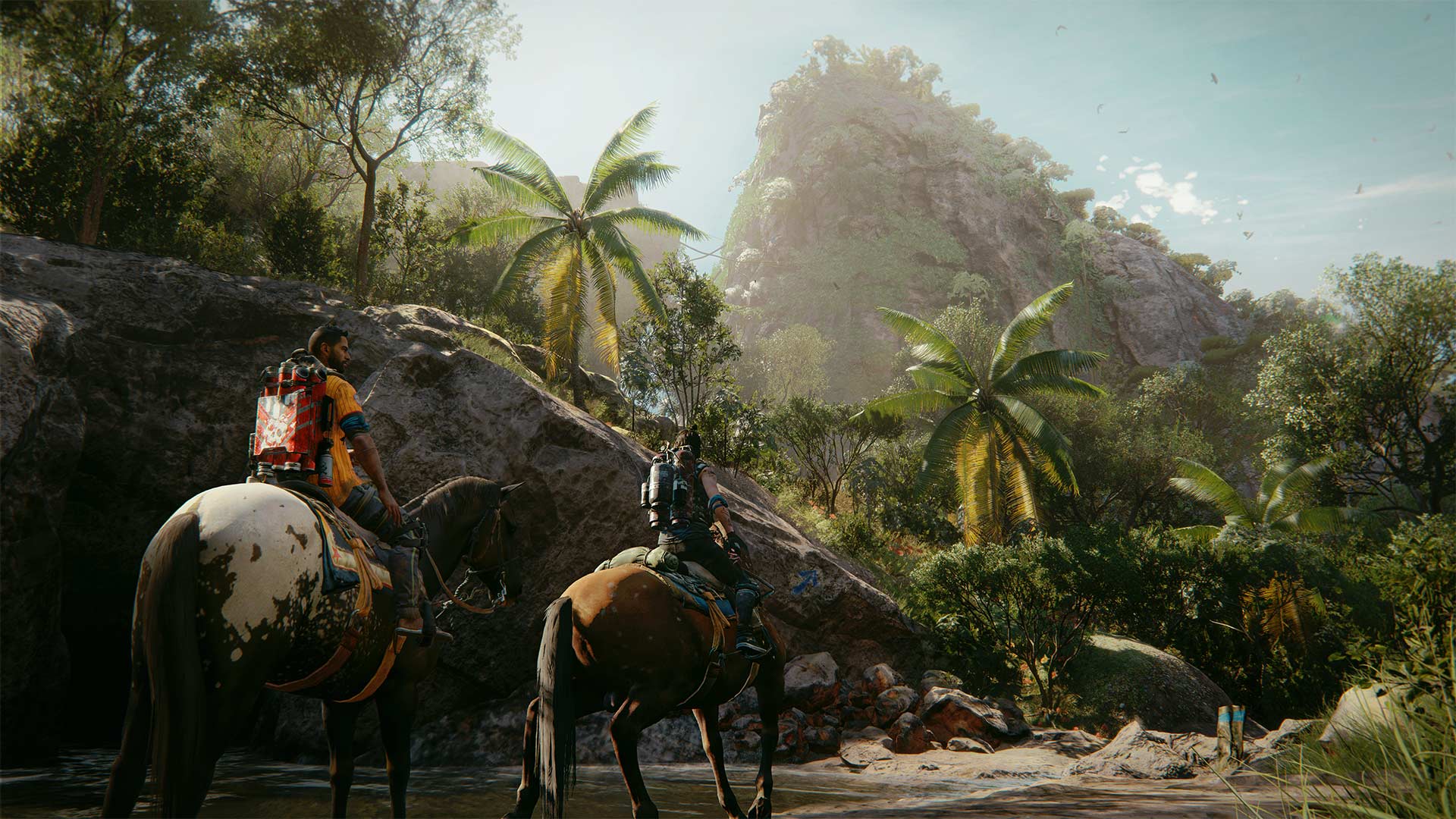 Other obstacles include anti-aircraft cannons that are marked in each region that will prevent you from flying in via aircraft until you destroy them. I initially found these tedious, but I eventually came to appreciate how they, when coupled with other elements like the horses, encouraged me to think a little more about how to get from Point A to B. Sometimes, I would decide to glide via wingsuit from a nearby mountain, while in other cases I would cross dense forests on horseback. It’s far more involving and thoughtful than simply fast travelling or hopping in a car and driving there.

At the same time, Ubisoft Toronto has graciously removed one of the most frustrating elements of Far Cry 5‘s open-world. In that game, Joseph Seed’s cultists would regularly attack you on sight, which proved a massive hindrance when going from mission to mission or even just free-roaming. In Far Cry 6, Castillo’s forces actually won’t engage unless you provoke them or enter a specifically marked forbidden area. There are even some members of the regime that you can pay off to discover new points of interest on your map, as well as find notes and other environmental objects to fill out your map. (As with Far Cry 5, the infamous “Ubisoft towers” are, mercifully, nowhere to be found in 6.) Without the constant interruptions from enemy gunfire, I was able to fully absorb the game’s splendidly unique Latin-American atmosphere. 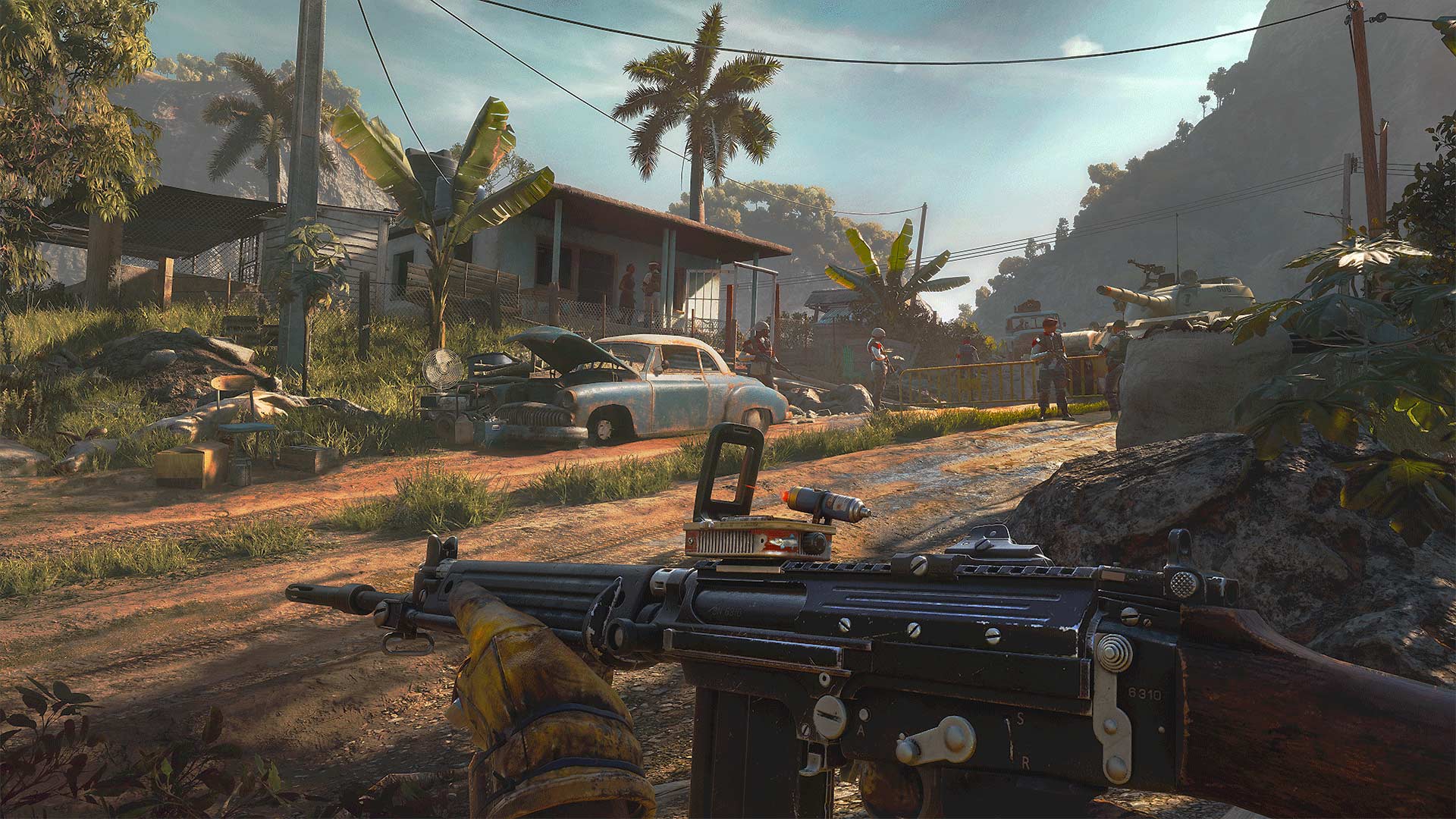 That’s not to say the tedium has been removed completely, though. I did find myself sighing over a fair number of missions consisting of multiple distant objectives to complete. For example, one mission required me to take out an anti-aircraft weapon more than one thousand in-game metres in one direction before heading the same distance the opposite way to locate a helicopter and then fly to a third and final equidistant marker. Cutting out some of this busywork would have tightened up the overall experience, but it at least doesn’t happen too often.

Far Cry 6 also has a few tricks up its sleeve with respect to combat. Of course, you’ve got your standard mix of handguns, assault rifles, snipers, bows and other firearms. But Far Cry‘s gear system makes these feel deeper than ever. As you explore Yara, you can discover or purchase different equipment which offer unique abilities that suit varying playstyles.

“Having such freedom to tailor both Dani’s arsenal and looks felt rewarding and encouraged me to seek out new gear and experiment with different loadouts.”

Want to go in loud and set fire to everything with your flamethrower? One pair of gloves will automatically put out any self-inflicted fires to reduce the damage you cause to yourself and let you keep the flames going. On the other hand, a certain pair of shoes can reduce the noise you make to let you sneak around more stealthily. Best of all, there’s a ‘transmog’ option so you can mix and match the stylish look of one item with the perks of another. Having such freedom to tailor both Dani’s arsenal and looks felt rewarding and encouraged me to seek out new gear and experiment with different loadouts. 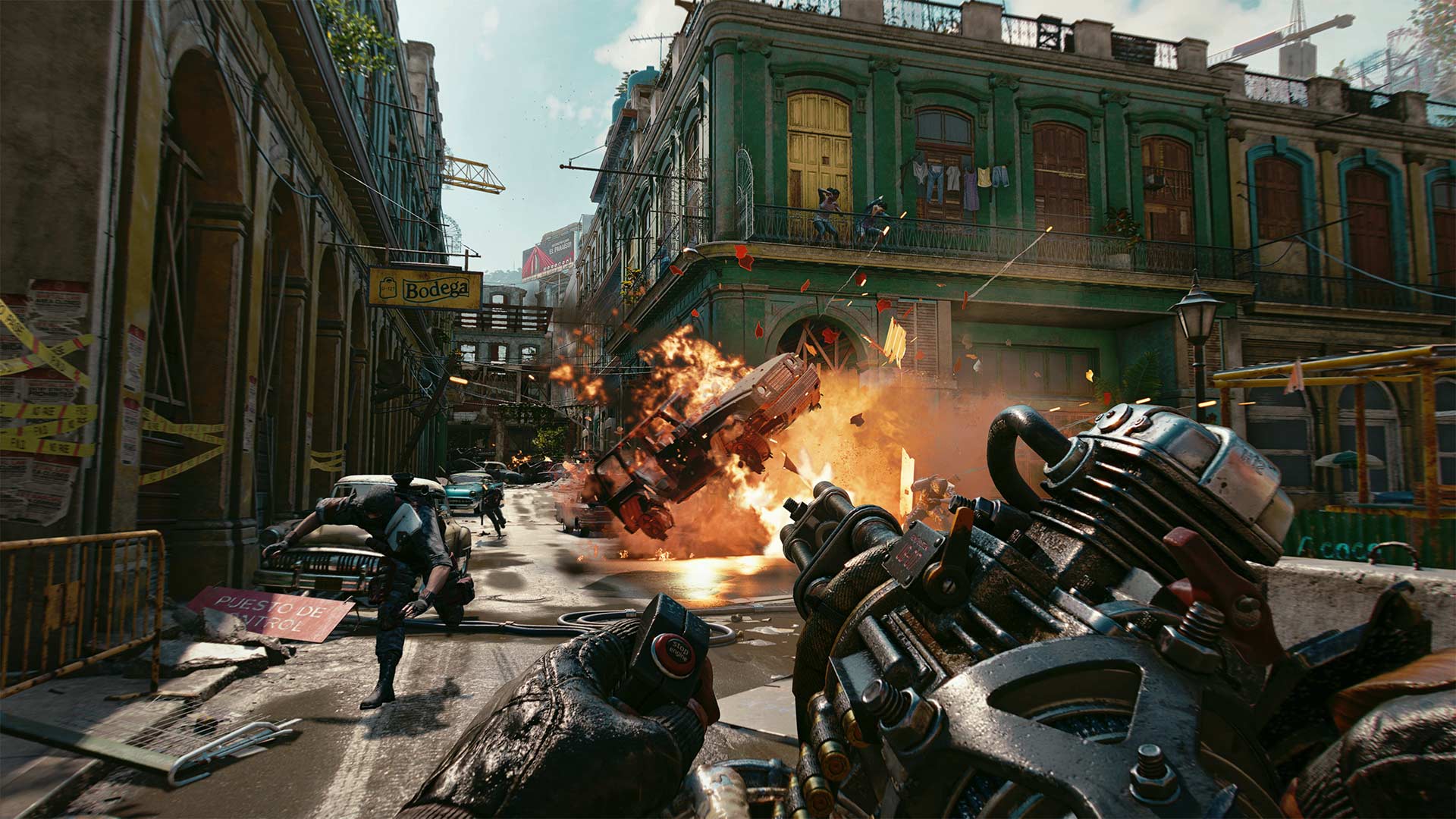 There are also devilishly inventive ‘Resolver’ weapons to unlock, which include a gun that shoots CDs and plays “The Macarena,” a shield-and-revolver shotgun pairing or a miniature cannon that blasts electricity to disable vehicles and even explode enemies. Further, you’ll have different ammo types that are better suited for specific enemies, like armour-piercing rounds for heavy troopers. It’s an effective means to push you to be even more thoughtful when preparing your loadout so you can attain maximum efficiency in shootouts.

Accompanying all of this are ‘Backpacks of Destruction’ — effectively, they’re recharging ‘supermoves’ that let you shoot homing rockets Boba Fett-style, emit a wide-ranging EMP or douse the ground in flames, to name but a few. With Far Cry 6 admittedly having some steep (and, occasionally, unearned) difficulty curves featuring significant enemy forces, these powerful weapons came in handy quite often. That said, the outlandishness of these guns can admittedly create tonal whiplash during the game’s more serious bits, so I sometimes found myself not using them so as to not take me out of the moment.

But my absolute favourite aspect of Far Cry 6‘s gameplay is Chorizo. The oh-so-adorable wheelchair-equipped dog is one of the recruitable CPU-controlled allies that were featured in various forms in previous Far Cry games. From the fearsome alligator Guapo to the goofy rooster Chicharrón, there’s no shortage of interesting and uniquely useful animal allies, but Chorizo is by far the cutest. (And yes, you can pet him and the other Amigos — it’s wonderful.)

On top of being absolutely adorable, he can actually distract enemies, which perfectly complemented the stealthy ways I normally play. The only (rather unfortunate) downside, however, is that Ubisoft has frustratingly made both Chorizo and the aforementioned CD gun into pre-order bonuses.

Far Cry 6 is the perfect example of how to reinvigorate interest in a long-running franchise. Ubisoft Toronto hasn’t completely shaken up the core tenants of what Far Cry is, but rather, it’s made smart refinements in several key areas, particularly story, exploration and character progression. In so doing, it’s laid a strong foundation for future Far Cry installments, getting me legitimately excited to see where the series might go next.